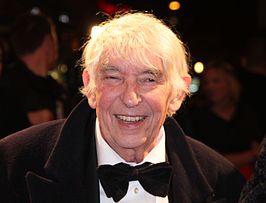 Aat Veldhoen was born the 1st of November 1934 and raised in Amsterdam. He is a well-known graphic artist in the Netherlands, even though the biggest part of his work was painted between 1960 and 2000.

Aat Veldhoen has always thought that art is part of the people, and it develops during the time , and he tries to show this in his drawings.

During his life he has focused on different visions of the human body, that we can see specially in his portraits. Art Veldhoen has great psychological insight of the people he portrays. His interest for human life and all its aspects brought him to the Binnengasthuis hospital in Amsterdam where he drew patients and surgery while working as an intern.

During this time, in the late 50s, he concentrates on visualising the “human on the border between life and death”. In an operation room of a hospital he sketches people on the operation table, pictures of women giving birth and drawings of traffic accident casualties.

He received three times in a raw, the Royal Award for Free Painters for young and promising painters.

Living from his art makes him feel in a privileged position as he thinks art should be available for everyone. That’s how in 1964, Art Veldhoen takes heavy interest in rota print techniques . His ideal is to make “art for the masses”: by making big productions he can sell his prints for a few guilders each, which he does from a cargo bicycle.

His paintings have been exhibited in the Rembrandt House , the Rijksmuseum and theAmsterdam Museum, and in 2013, Aat Veldhoen launched an exhibition with his àlongtime friend Man Kin Ho in the Jan van der Togt Museum in Amsterdam.

Aat Veldhoen still lives in Amsterdam with his love, Hedy d’Ancona . He is still considered as one of the most important modern graphic artists.