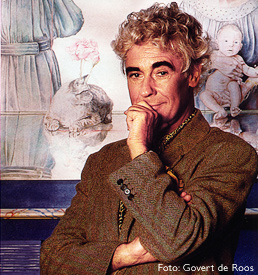 Corstiaan De Vries was born in 1936 in Rotterdam, where he studied at the Academy of Visual Arts . He then became the decor and costume designer for ballet and the Rotterdam theater. He also worked as a pianist for a long time in the famous Cabaret Lurelei .

In 1965 Corstiaan de Vries started his drawing career. His artwork is entirely made with coloured pencils on ivory cardboard. He became internationally famous with his portrait of Queen Juliana for her silver government jubilee in 1973.

From that year on, he produced an immense stream of portraits of families, children and even pets. Under which the Heineken Family and Simone Kleinsma.