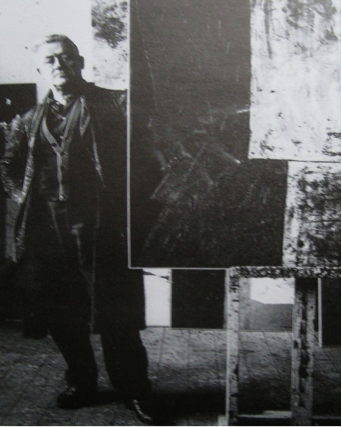 Willy (Herman Friederich) Boers was an art restorer when he started painting himself at the age of 23. The start of Boers’ painting career in the 1930’s coincided with the rise of the “New Objectivity” .

In this period he painted portraits and Mediterranean landscapes in a realistic style. The traumas of war caused a turnover in Boers’ style. A feeling of powerlessness and lack of freedom formed him into a convinced abstract painter. His desire of complete abstraction led him to create the Vrij Beelden group with 12 other painters like Dolf Breetvelt for instance. The work he created in this period shows kinship with works of Paul Klee, Joan Miro and Kandinsky and was partly exhibited in the Salon des Realites Nouvelles.

Willy Boers work demonstrates great craftsmanship and the use of colours applied with a great sense of balance, and has been part of exhibitions in Indonesia, Amsterdam, Paris, Germany and Switzerland. His paintings are present in various museums, including the ‘Cobra museum of Modern Art’ in Amstelveen (Holland).

In an exhibition held at the Fodor Museum in Amsterdam in 1974, Willy Boers explained: “After the war it seemed impossible for me and artists in many countries to carry on sculpting images of the external forms of the world around us. The foundation of the “Salon des Réalités Nouvelles” in 1948, an extension of the group of ‘Abstraction Creation’ (1932-1936) in Paris, gave shape to and stimulated these ideas.”

The objectives of abstraction are perfectly described in his explanation: an art made of lines, forms and colours interpreting and expressing an inner shape or form.

This concept was also described in 1912 by Kandinsky in his book ‘Ueber das Geistige in der Kunst’ and again later in his 1926 publication of ‘Punkt und Linie zu Fläche’, and was widely accepted by many groups of artists.

The boundaries of national art faded. This movement attired artists from all over the world, which exhibited and worked together inspired by the Dutch De Stijl (“the style”) movement, and the Russian constructivism.

This was a general counter-reaction to the conformist realism pervading the world of Art. A tangible international quest developed towards the reality behind the reality.